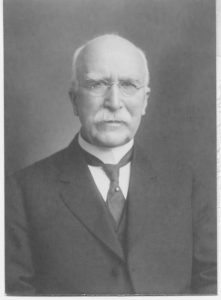 Colonel Dudley Chase Smith was born on December 9, 1833 — the only son among ten children. When he was 12 years old, his father died, leaving him with great responsibilities for such a young boy. He went to work, first on a farm and later as a clerk in a general store in Shelbyville, Illinois until he turned 17. He attended Jubilee College near Peoria for one year, then became a partner in the store until the age of 27, when in 1861 he enlisted in the Army. Smith served under General Ulysses S. Grant as a first lieutenant in the Army of the Cumberland. In April 1862, he was severely wounded in the hip at the battle of Shiloh. He rejoined his command in July and was promoted to the rank of captain. In 1864, with a commission of colonel, he organized the 143rd regiment of the Illinois Volunteer Infantry and remained in the army until 1865.

During his lifetime he accumulated farm acreage in three Illinois counties and one Indiana county. On May 22, 1920, Colonel Smith died. The obituary in the Bloomington Daily Bulletin emphasized his benevolence to the community: “Inspired no doubt by the deprivations and hard work of his youth, Colonel Smith’s greatest delight was to help others, not only individuals but small and struggling institutions. There is scarcely a worthy cause in the community to which he has not contributed generously. He was especially interested in helping young people to secure an education, and made liberal donations.” He had six daughters and one son, Dudley Chase Smith, Jr. 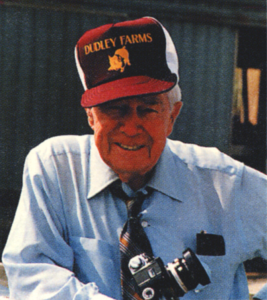 Dudley Chase Smith, Jr., was born on January 20, 1896. Although his parents hoped he would attend the University of Illinois, he wanted to go away to school, so he studied agriculture at the University of Wisconsin and graduated in 1920. That same year, his father died and he began managing the family farm.

The earliest record of Smith’s lifelong correspondence with the University of Illinois is dated December 31, 1923. In a letter to Herbert W. Mumford, dean of the College of Agriculture, Smith requested help in finding a U of I graduate to begin working for him as a farm manager. He wrote:

He should be a man who has a personality such that he can deal with the farmers under him. Last but not least he must be a man with business ability and thoroughly honest and reliable. To such a man I am willing to pay a fair starting salary with ample opportunity for advancement with results achieved.

Smith expressed his concern for the future of farming and his desire to contribute to research that would sustain farmland and the rural community. In numerous letters and documents written in the 1970s, he wrote eloquently and passionately about his beliefs and concerns about agriculture. Dudley Smith, Jr., liked to think and write about the big picture. His heartfelt concern for the future of agriculture and how changes in agriculture could affect other aspects of life is a theme that runs through much of his correspondence with the University of Illinois. And it is this theme that shaped the vision of the Dudley Smith Initiative.